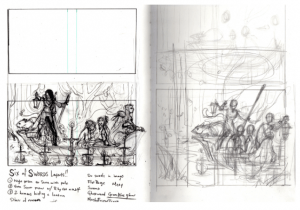 The much-anticipated new edition of Blue Rose Romantic Fantasy Roleplaying is wrapping up in production, soon to go off to print, with the final PDF edition released to Kickstarter backers, and then available with pre-orders of the book. On the design and development side, we’ve moved well past the core book for the game and into some supporting products, including a Narrator’s Kit with sturdy reference screen and pre-generated heroes to get you playing quickly and easily and something every tabletop roleplaying game can use, namely adventures!

Six of Swords is a forthcoming anthology of adventures for Blue Rose. As the name suggests, the book will contain six different adventures set in the world of Aldea, suitable for different levels of characters, and intended for Narrators to use as inspiration and resources for creating their own Blue Rose adventures as well. Authors Jaym Gates, Steven Jones, Kira Magrann, Alejandro Melchor, Malcolm Shepherd, and Rebecca Wise each present a tale where your heroes can make a difference.

The anthology includes ruined mansions, masquerade balls, vampiric curses, mysterious masks, sorcerous secrets, ghostly hauntings, lost loves, looming threats to the Kingdom of the Blue Rose, and tragic quests where heroes are called upon to make the right choices. As the initial cover concept sketches by artist Nen Chang show, the adventurers are expected to delve into some dangerous and inhospitable places, like the depths of the Veran Marsh, in pursuit of their goals.

Six of Swords is finishing up in development and editing and moving on to production and layout right after the main Blue Rose book and the Narrator’s Kit are complete. We’re looking forward to bringing you stories of adventure in the world of Aldea for you and your players to tell and enjoy.