If you’re familiar with Green Ronin’s Blue Rose Romantic Fantasy Roleplaying at all (and, if you’re not, you should visit its page on our site) you know the game features strong themes of inclusion, both from a design perspective and in terms of the culture and history of Aldis, the primary civilization of the setting, often in contrast to Aldis’s neighbors. This includes diversity in terms of race, gender, romantic interest, and more.

However, Aldea (the world of Blue Rose) is not Earth, and does not have the same history as our own world, so the diversity in Aldis and elsewhere in the setting exists out of context with certain realities of marginalized peoples here in our world and in our own cultures, particularly (North) American culture. How does this affect our portrayals of different people in Blue Rose? In a number of often broad and subtle ways. 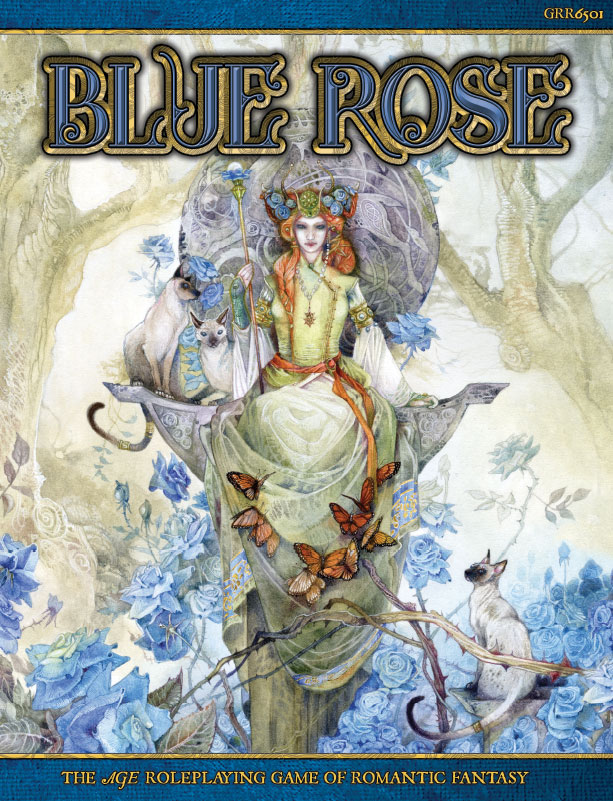 Much of Blue Rose’s racial diversity owes to two things, one history, and one mythic. In the history of the region, there was once a Great Kingdom with connections to far-flung places of the world (perhaps even other worlds) via fantastic airships and arcane gateways, creating a cosmopolitan society that was a melting pot of cultures and peoples. It was succeeded by an Empire which forcibly relocated and intermingled vast populations, such that modern Aldis is quite racially diverse. The mythic element is that the gods of Aldea appear themselves in a wide range of human (and even non-human) races, and it may well be that the gods—who fashioned mortal, material bodies for people at the dawn of time—made humanity as diverse and different as them. So Aldin religious belief tends towards racial diversity and plurality rather than any sense of “racial purity”.

Where racial conflict does come into Aldin culture is in terms of the non-human night people, created by the Sorcerer Kings using arcane means. Once, they were a soldier and slave race of the Empire. Now many of them are free and able to choose their own path, but there are some who consider them inherently corrupt due to their origins. Night people and their allies struggle against these preconceptions to win and maintain fair treatment.

Aldin myth says that the bodiless spirits that descended into the material world were without and beyond gender, but that the bodies fashioned for them by the gods possessed sexual characteristics, leading to the creation of male, female, and those who were some measure of both, neither, or transitioning between the two—the laevvel. Aldean religion also believes in reincarnation of those bodiless spirits, so everyone has been (or will be) every sex, gender, and race at some point. Male and female are not “normal” in Aldin culture, merely common.

Some societies have gendered roles, such as the Matriarchy of Lar’tya, an Aldin trading-partner and ally, whereas in Aldis the notion of differentiating people’s social roles based on gender seems a strange and foreign practice. Although it only merits a brief mention in Blue Rose, it’s made clear there are widespread, easy, and effective natural means of controlling conception for all responsible adults, a significant factor in gender equality in Aldin society. Similarly, it’s made clear there are effective natural, alchemical, and arcane means of gender transition on Aldea, significant to laevvel characters.

Sexual and romantic orientation is likewise influenced by Aldean myth and spirituality: There are deities with same-sex and opposite-sex relationships, as well as polyamorous relationships among the gods, all reflected in the cultures of mortals as well. In particular, Aldin sexuality is less stigmatized, and far more openly mapped on a kind of bell curve, with the majority of people attracted to persons of either or any gender, and minorities as either end of the spectrum who are only attracted to either their own or another gender. Again, bisexuality (or even pansexuality) isn’t “normal” in Aldis in that there is a value judgment attached it it, it’s merely so common that there isn’t a particular name for it, whereas those with primarily same sex attractions are caria daunen (lovers of the dawn) and those with different sex attractions are cepia luath (keepers of the flame).

Similarly, various forms of polyamory are quite common in Aldis, although there are also “twilights” (literally “two lights”) who prefer monogamous coupling. Some cultures favor polyamorous relationships, star marriages and heath marriages, while others favor monogamy, or at least some form of pair-bonding. There are cultures which attach moral or practical judgements to certain family arrangements, and others that do not.

Aldin culture recognizes differently-abled people as having their own unique strengths and roles, particularly in a fantastic world where there are threats based on the things one might see or hear, for example, and heroes lacking in normal sight or hearing can overcome these threats more easily.

There are also means for compensating for differences in ability in a setting where arcane powers of the mind and spirit can move or perceive things with the talents of the mind alone; indeed, with the existence of the rhydan (intelligent awakened animals) there are entire species of differently abled people on Aldea, living in bodies quite different from humanoids, with their own unique abilities and challenges, and the need to recognize these people as precisely that: people, and not “beasts” or “creatures”.

Blue Rose is an example of a fantasy setting that takes many of the “what if?” questions we use to create fantastic worlds and applies them to diversity, presenting different and accepted ways of being in world that is both unlike and similar to our own. We hope you’ll take the opportunity to visit and tell your own stories there.