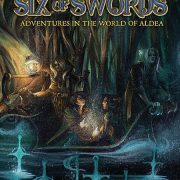 The Adventure Gaming Engine (AGE System) edition of Blue Rose: The Roleplaying Game of Romantic Fantasy is now in the hands of backers of the Kickstarter and available through distribution in fine game stores everywhere. As readers digest the contents of that sizable book, those looking to run a new Blue Rose game of their own need only one additional resource: Adventures! The Blue Rose book provides a sample adventure (“The Shadows of Tanglewood” by Steven Jones) and a wealth of adventure hooks and ideas, but for an ongoing series, Narrators are going to want additional adventure resources. Fortunately, we’ve anticipated their needs.

The new Six of Swords adventure anthology offers a set of six adventures for Blue Rose, complete stories including important characters, setting information, and all of the material a Narrator needs to run them.

Most of the adventures are pitched toward low-level heroes, working from 1st level up through the upper low levels. The last couple adventures are intended for mid- and high-level heroes, both for Narrators who want to start out with a higher level game, and to offer examples of such adventures for a series as it grows and develops. Each adventure should be good for multiple sessions of game play, and most feature mysteries and character interaction alongside action and combat encounters.

The adventures cover a wide range of locations and styles, from the depths of the Veran Marsh to the open grasslands of the Plains of Rezea and the deep woodlands of northern Aldis. Adversaries range from criminal syndicates to corrupt sorcerers, vengeful spirits, and terrible unliving creatures like vampires.

We think this format provides a nice combination of adventures usable right out of the book and varied locations and plots. If Six of Swords does well, it may be a model for future Blue Rose adventure collections. We’re looking forward to offering other adventures and source material for the Romantic Fantasy role playing game and the fantastic world of Aldea. 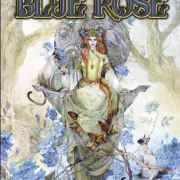 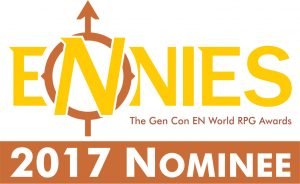 We are pleased and humbled to be nominated for eight ENnie Awards this year. We’ve included a list of our nominations at the bottom of this post.

In our excitement about the ENnies we placed several products on sale in our Green Ronin Online Store. Please check out our 2017 ENnie Awards Sale.

Our nominations are for:

As always, sincere congratulations to our fellow nominees, and thank you to all who worked on these products, all who vote, and everyone else we may have forgotten to list.