Hello and welcome to Walking the Royal Road, what I hope to be an ongoing series on using the Tarot (or Royal Road, in Aldean parlance) in Blue Rose AGE games.

The Tarot has been used in roleplaying games for quite a long time, in a variety of contexts, and with good reason. Reading and deciphering the Tarot is less a matter of divination as it is storytelling—each card carries an intrinsic meaning (and sometimes a second meaning when the card appears inverted) that can serve as a building block for a larger narrative. When multiple cards are laid out, with each card position also having a meaning, it is possible to use them to build a small story of some kind, through the language of symbolism and the very human act of pulling disparate elements into a larger narrative.

The Blue Rose AGE core book already suggests a use of the Royal Road: in the establishment of a character’s Calling, Destiny, and Fate. There are also some suggestions for using tarot in Chapter Ten (p. 313, in the section “Walking the Royal Road,” where the title for this series comes from). This series of articles is going to suggest some additional uses for them.

The cards we use in these articles are the Shadowscapes Tarot, with art by the amazing Stephanie Pui-Mun Law, whose art has graced the covers of Blue Rose books throughout the game’s history.

Today’s article is going to offer some additional character building. Romantic fantasy, as a genre, focuses not just on magic and feats of derring-do, but also the relationships formed by the characters. Characters do amazing things for love, for friendship, and for hate, and these kinds of motivators should always play into games of romantic fantasy, to some degree.

In order to have these kinds of motivations, though, player characters need some relationships in place. This system is intended to augment the Relationships mechanics, as found on p. 60 of the Blue Rose core rulebook. Where that system helps define how strongly heroes feel about other characters, this one will help with the brainstorming of figuring out who they are.

The spread for this method is a simple three-card spread for each character.

The Role Card indicates in what capacity the PC knows the character in question. Take a look at the suit (pentacles, cups, wands, swords, or Major Arcana).

The Personality Card indicates what this person is like. Use the tables for Calling, Destiny, and Fate in the Blue Rose core rulebook as a starting place. Note that this card does not indicate this character’s Calling, Destiny, or Fate—it’s simply what their outward-facing personality is like. There are always depths beneath this surface.

The Relationship Card indicates what your relationship with this person is like. The meaning of the card should be applied to this in some capacity. A Six of Wands suggests recognition of success, so perhaps this person looks up to you for your heroism; in contrast, the Page of Swords is about having enthusiasm but needing more information, so this card in the Relationship space suggests that the person looks to you as a source of information, or is themselves such a source for you. 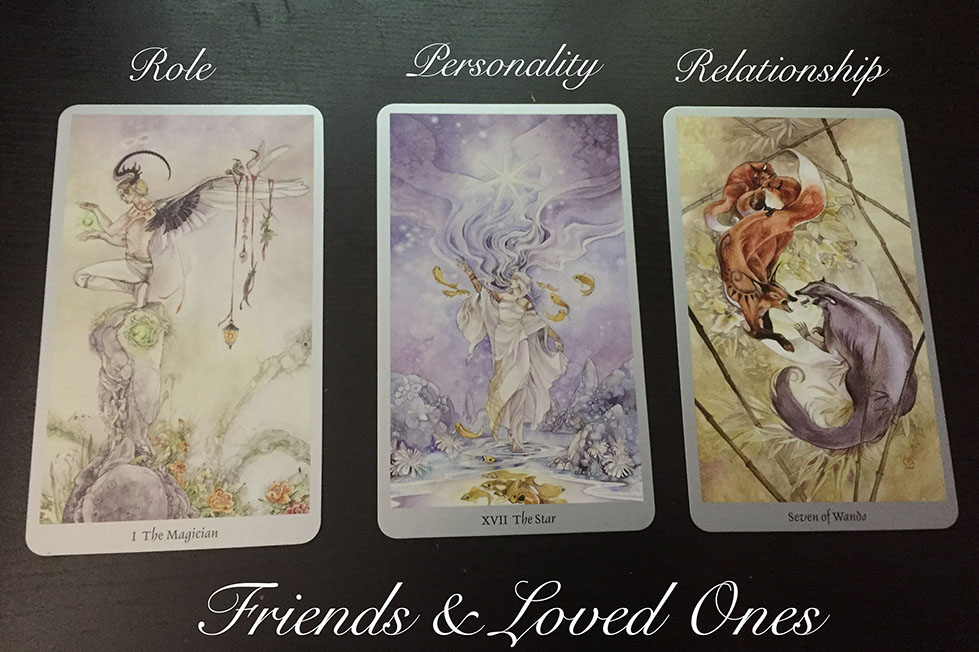 In the image, we have laid out some cards in the Friends & Loved Ones Spread.

Role: The Magician. We know this person because of magic, clearly. They might be an adept of some kind, or if we’re playing an adept or other talented character, perhaps we aided them with our own arcane arts.

Personality: The Star. Consulting the Callings table on p. 57 of Blue Rose, we see that this card represents “Artistic Mastery.” This character seems to be an artist to everyone they know, and not just a dabbler, either, but someone who really works to master their craft and achieve their vision.

Here is just one example of a Narrator character generated using the spread above. It’s far from the only one, to say nothing of the variety possible from other card results entirely!

Godia Tulry: The Wishful Scrivener. We met Godia in the way she tends to meet new people—when she barged right up to us to ask us about our experiences and theories about the arcane. The other adepts roll their eyes and make themselves scarce when she shows up, because she’ll take up every bit of your time, if you let her. Despite their warnings, though, we find her delightful. She’s a dedicated magical chronicler, and we’re good enough friends that she has shyly confided that she wants more than anything to wield magic herself some day, but she just doesn’t have the Talent for it. Still, she is very sweet, loves when we use magic around her, and whipcrack sharp when it comes to arcane theory and history.

Thanks: To Stephanie Pui-Mun Law for her amazing Shadowscapes tarot, which we use in this article. Her deck can be purchased off of Amazon here.

Green Ronin Freebooters – Run games for us!
Scroll to top Skip to content