One of the resources I wanted to include in the upcoming Aldis: City of the Blue Rose when development began on that book was a simple “random encounters” system. Rather than monsters to fight, though, I wanted this system to be iconic “day in the life” scenes for the mighty capital city of the Kingdom of the Blue Rose. 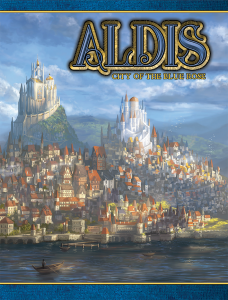 Aldis: City of the Blue Rose book cover is a work in progress and may not reflect the final version. Art by Alayna Danner!

The Encounters in the City of Aldis appendix works simply: draw anywhere between one to three cards from the Royal Road (depending on how much detail you want to pepper the scene with), interpret as appropriate for the scene in question, and present to the players. It can also be interesting to have players draw their own cards for their scenes, and to even have them construct the scene as they or another player encounter it.

Below are two examples of how we’re using the system.

Example I: A Busy Square in the Middle Ward

For this example, painting the scene for player characters who’ve arrived in a busy neighborhood square, the Narrator chooses a three-card draw, having each of the players who are present for the scene draw one card. The cards drawn (and the interpretation from the appendix) are:

Using This Draw: All of these cards are set up fairly well for scenes of the sort being played through here; one of them even makes mention of a square! The Narrator describes the scene:

For this example, one of the player characters is meeting a contact in a familiar tavern in the deeps of the night. The setting is one where not much is going on, but the Narrator wants to inject a little color into the scene, just to keep the player character (a spy always on the lookout for enemy operatives) on their toes, so the Narrator draws a single card:

Using This Draw: Now, this card obviously isn’t entirely well-suited on its face for this scene. But the Narrator makes some alterations, adapting it for the quiet of the night-time tavern, thus:

* Note that all the quoted text is as yet unedited, and may change in the final product.